KZCC Round 6: Nakamura back on top 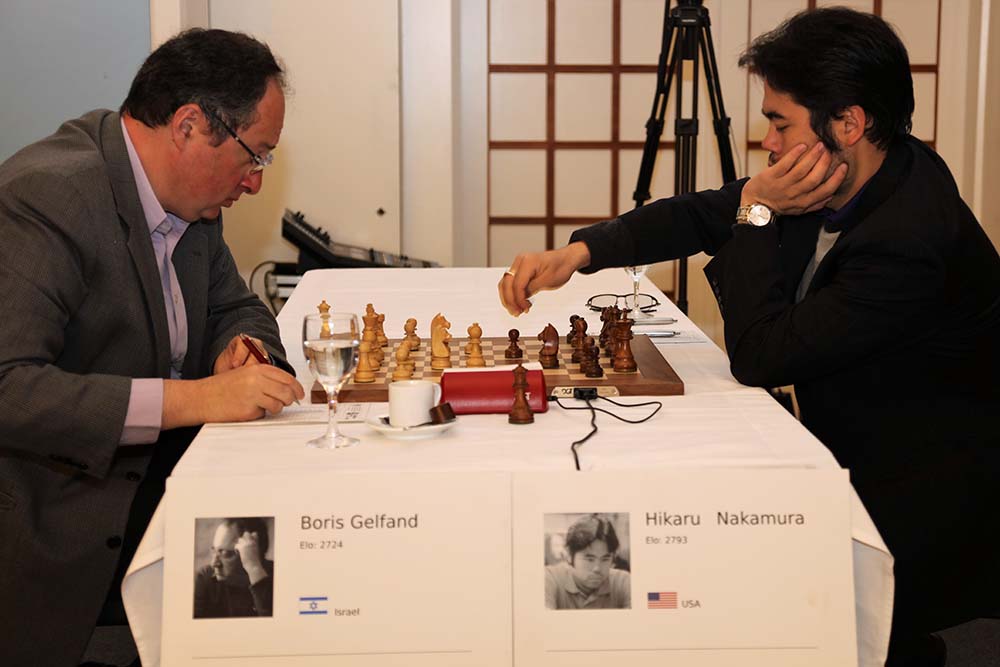 The king is back on his throne - the winner of the ZCC 2015 and 2016, Hikaru Nakamura, reconquered the leading position after hitting an unexpected punch into Boris Gelfand's position in a bishop versus knight ending that seemed to steer to an uneventful draw.

The start of the game Gelfand vs Nakamura, however, could not have promised less - in a Queen's Pawn Game with Bf4, Gelfand quickly exhanged the queens and the rooks plus a couple of minor pieces to end up in a balanced ending with the Israeli having a good but ineffective bishop versus Nakamura's potentially dangerous knight. Everything appeared to be set for the draw, but then Gelfand allowed the American to expand his pawns on the kingside until they got dangerous potential to create a deadly passed pawn. Maybe white missed the final idea of g4-g3 connected with the manoeuver of Ng4-h2 to win the white bishop. With only seconds on the clock, Gelfand had to resign.

Meanwhile, Nepomniachtchi and Pelletier had played an interesting game that begun with the so-called "Hedgehog Setup", an opening pattern that is known to be extremly solid for black and difficult to crack, but it's also rather passive and therefore a rare guest in top tournaments. Nepo impressively demonstrated why - he didn't rush things at all, but calmly placed his pieces on the best possible squares and only then began with concrete measures against the Swiss king. All of a sudden, Pelletier was forced to give up an exchange for no compensation in order to protect his weakness on f7. He could have resigned immediately, but continued playing for some moves without getting the chance to come back into the game.

Last year's runner-up Viswanathan Anand continued his policy of "no prisoners" against Russian Peter Svilder and scored his second win in a row and already his fourth in the tournament. In a Sicilian Defense, the former World Champion advanced his kingside pawns early to gain space and drive the knight on f6 away and with the first chance given sacrificed a piece on e6 for a dangerous attack against the black king that was stuck in the center. Svidler tried a counter-attack combined with an exchange sacrifice to release the pressure, but only to find himself in an ending with two minor pieces vs. a rook and two pawns that turned out to be highly inferior. The Russian then tried a desperate pawn advance in the center with the idea of forking the white rooks with his bishop, but after the simple 29.Rb3 this only resulted in the loss of another pawn. A few moves later, Svidler called it a day.

The last game on stage was Kramnik vs Oparin and again saw the former World Champion opting for a calm Colle System in the opening. Oparin, however, treated the position very well and even came out with a better position, having the pair of bishops against Kramnik's two knights. But in time pressure, the young Russian player lost track and the game ended in a highly interesting position with Oparin having two strong bishops versus Kramnik's rook and three pawns. However, Oparin managed to set up a successful blockade and when the smoke finally cleared, a drawn position was reached by force.

Before the final round of the New Classical, Nakamura is in the lead again with 9 points followed by Anand and Nepomniachtchi with 8 and Svidler and Kramnik with 7. Today at 5pm, the leaders will clash in the games Nakamura - Anand and Svidler - Kramnik, so stay tuned to see who will get the best position for the final Blitz tomorrow.