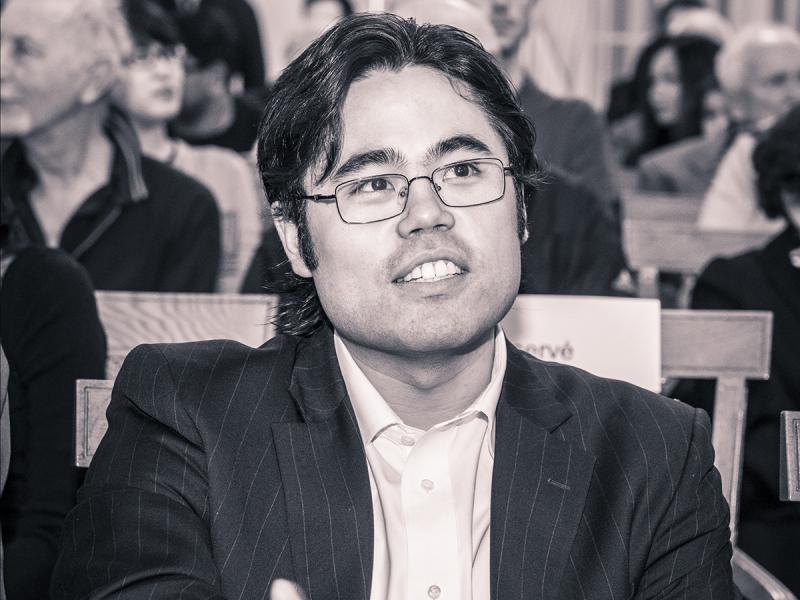 The first round of the 2017 KZCC already brought two decisive games: The winner of yesterday's opening blitz and tournament favorite Hikaru Nakamura gradually outplayed the Swiss Grandmaster Yannick Pelletier after a quiet, but venomous opening. The position had been level until the middle game, but then Pelletier allowed the American both to weaken his pawn strucuture on the king's wing and to gain the bishop pair. Nakamura showed his class and led the game into an ending where he could attack his opponent's weaknesses on both wings. In a hopeless situation with his queenside collapsing, Pelletier resigned.

The second win was scored by the Russian Vladimir Kramnik, who also chose a seemingly quiet symmetrical variation of the English opening that led into an equal middle game, but then Kramnik began to increase the pressure on Anand's pawns and thus gained a significant advantage in space. Finally, the Indian decided to sacrifice an exchange for two pawns in order to release the pressure on his position, but Kramnik found a fine ressource to break into black's camp with his heavy pieces. Faced with mate or huge loss of material, Anand called it a day.

Nepomniachtchi almost joined Nakamura and Kramnik in today's winners list, but although he had a huge, maybe even winning advantage against Svidler after the opening, he let his opponent slip out into a queen's ending, where Svidler, despite being two pawns down, suddenly gained counterplay thanks to his passed pawn on the h-file. Maybe Nepomniachtchi's position was still won, but then he overlooked a perpetual check by Svidler.

The only "quiet" game was Gelfand vs Oparin that started as a theoretical Bf4 Queen's gambit. It appeared that Gelfand had some pressure in the early middle game, but Oparin set up an excellent defense and conducted the game into a balanced queen ending and a draw was agreed soon afterwards.