KZCC Round 7: Nepomniachtchi catches up, 5 players within striking distance 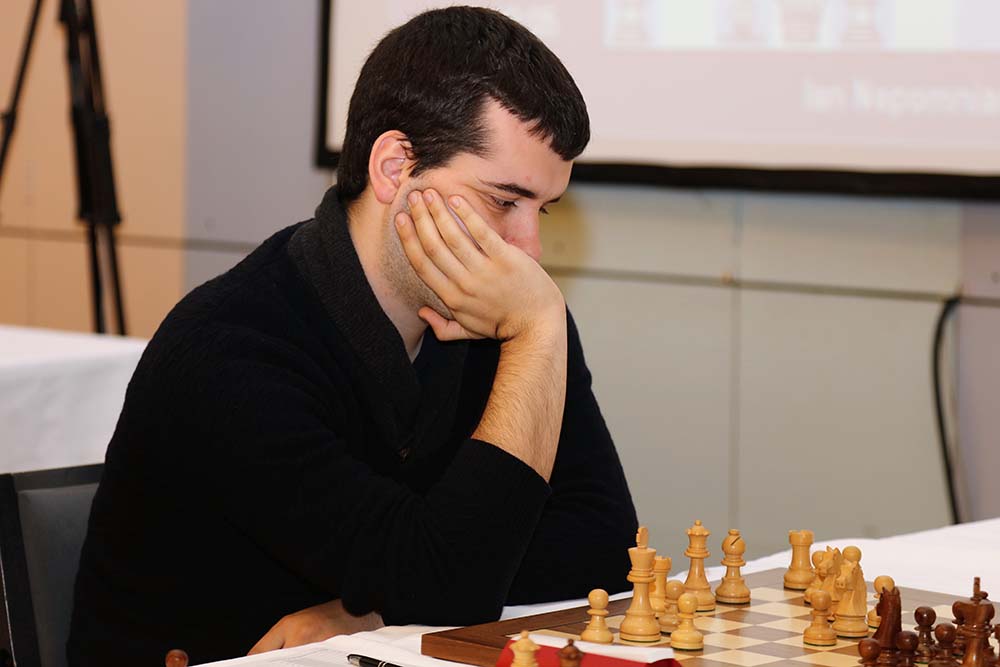 The first part of the 2017 KZCC is over - after the New Classical section with a time control of 45min per game + 30sec/move the tournament will continue tomorrow with the Blitz. And the tension couldn't be higher as the question of who will be the winner is still undecided and at least five players are still in striking distance.

The most important game of the 7th round was definitely Nakamura vs Anand, the clash of last year's winner and runner-up. With a win, Anand could have overtaken the American in the table, but it soon became clear that Nakamura wasn't going to take any risks and after an ending with opposite-coloured bishops was reached, Anand scored his first draw in this tournament.

Svidler vs Kramnik went roughly the same - Kramnik employed a solid Russian defense that proved impossible to crack despite Svidler's efforts. Soon the rooks came of, then some minor pieces and after the queen swap the players shook hands for Kramnik's 5th draw in the 6th game.

But as we always had at least two hard fights per round, the remaining games compensated the spectators in terms of drama and tactics. The first happened in Oparin vs Nepomniachtchi, when white somehow overestimated his attacking chances against his opponents king and sacrificed a pawn he got no compensation for. A few moves later, Oparin even invested a whole piece to fire up his attack, but Nepomniachtchi kept his cool and repelled it with ease and, after Oparin's resignation, joined Nakamura in the lead.

Even more dramatic was Pelletier - Gelfand, where both players deliberately repeated their game from the Opening Blitz - and just like in that game, Pelletier allowed his opponent to sacrifice his bishop on h2 for an attack on the white king. As Pelletier stated in the post mortem, he had his computer calculating the variation for about 1 minute and as it showed something like "+2", he decided that Bxh2+ wasn't at all possible. As it turned out, the evaluation switches to "-0.7" after 1min and 30 seconds - and only if white proves to find quite a few only moves in a row, which is almost impossible over the board and with limited time. Therefore, it was no surprise that Pelletier faltered and, facing mate or decisive material losses, had to resign.

Before tomorrow's Blitz we have to joint leaders with Nakamura and Nepomniachtchi (both 10 points), while Anand is one and Svidler and Kramnik 2 points behind. The live broadcast with comments by Daniel King starts at 11am so stay tuned for the final curtain.