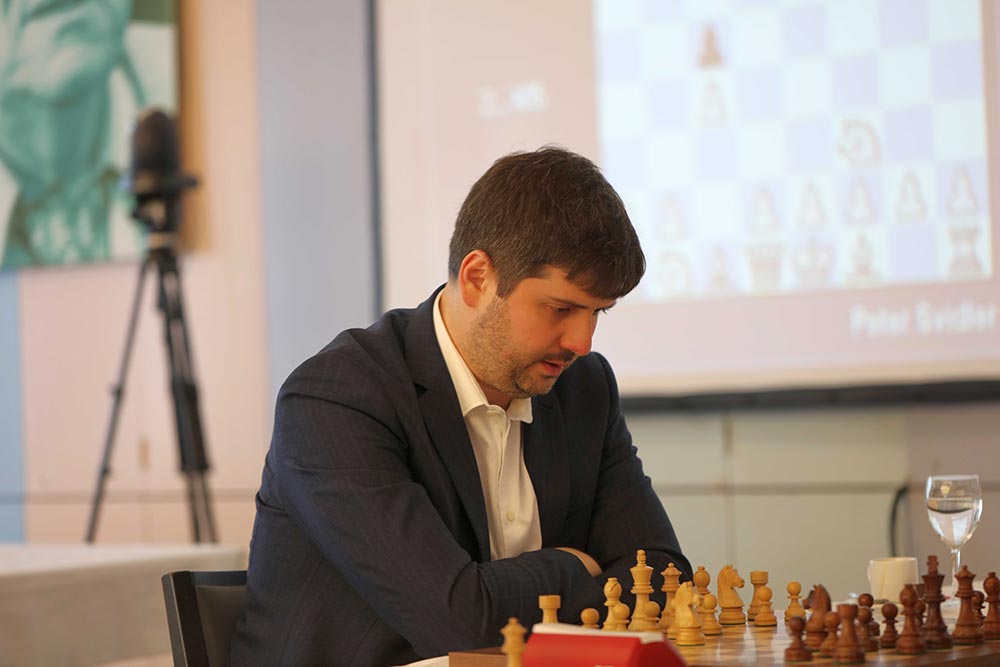 In the 5th round of the KZCC, the lead changed again. After Peter Svidler beat Grigoryi Oparin in a very impressive Sicilian game, he joined Hikaru Nakamura in the lead, who defeated Ian Nepomniachtchi with the black pieces.

So Oparin - Svidler can be called the game of today's round. It started as a highly unusual Sicilian Najdorf, with Oparin playing first 6.h4 and then 8.f4 - something you can only do when you are an established Grandmaster. If any chess pupil adopted this setup, he would definitely be disciplined by his chess trainer not to weaken his structure so early. However, chess has changed a lot since the days of Botvinnik and Petrosian and computer showed that you don't need to care about positional play anymore as long as you don't blunder anything. In any case, Svidler kept his cool and repelled the early assault on the kingside by conquering the strong outpost on e5 tor his knights. After both players had castled to the opposite wings, Oparin kept on attacking on the kingside, but the man from St. Petersburg not only managed to keep his king safe, but also launched a counterattack in the center that forced Oparin to exchange queens in a highly unfavourable moment. Svidler went into the driver's seat by attacking and winning Oparin's weak pawns and his passer on g4 finally won the day.

On the adjacent board, Nakamura and Nepomniachtchi fought a battle for the lead and one that could already have proven decisve in terms of the overall winner - had Nepo won, it would have been very difficult for the American to close the gap of three points in the final two rounds and the blitz. However, Nakamura played splendidly and quickly gained an advantage in what seemed to be some strange version of a Grunfeld Defense. He first exchanged black's strong bishop on g7, then split up his opponent's pawns on the queenside and finally raised the pressure on the dark squares until finally Nepomniachtchi had to give up a vital pawn and soon after had no moves left but to resign.

In Gelfand vs Anand, the Indian continued to follow main sponsor Oleg Skvortsov's advise at the Opening Ceremony: To fight for a win at all cost. And he succeeded again after bravely accepting Gelfand's pawn sacrifice in the opening. It first seemed that the Israeli had too much of an attack for the pawn, but Vishy quickly extinguished white's initiative and took over by returning the pawn in favour of a massive pawn chain in the center that shut out Gelfand's white-squared bishop from play. Soon Anand's rooks penetrated into the white camp and, with his knight joining the attack, he wove an unbreakable mating net around Gelfand's king. Anand is now the only player in the tournament who hasn't played a single draw so far (3 wins, 2 losses).

Finally, Pelletier - Kramnik was the quietest of the 5th round. The Swiss outsider went for a calm Catalan Opening and even gave away a pawn to get opposite colored bishops and some activity - and he was proven right, as Kramnik had nothing better than to return the pawn, when a dull ending with equal pawns was reached and immediately agreed drawn.

Before the final day of the New Classical, no less than five(!) players are still contenders for first place as they are only divided by a single point. Drama is about to be staged tomorrow, so stay tuned on our live site when the final battles will be fought on Sunday at 12:30 and 17:00 p.m.